Emerging Normative Change in Response to Climate Change?, 2021, working paper on SSRN, with Cristina Stefan.
Meeting the UN Paris Agreement will require unprecedented social change that goes hand in hand with technological and economic innovations. Research suggests that normative change, the change in what is perceived as morally acceptable, can drive wider large-scale social change, i.e., change in legislation, policy and behavior. In this paper we explore the normative narrative of some of the largest, recent transnational climate protest movements, Extinction Rebellion and Fridays for Future. Specifically, we analyze computationally a large data set of tweets in the context of these protest movements. Based on this analysis we propose that we are at the start of a normative change. And this normative change has the potential to push societies around the world out of their "business as usual" inertia into a new stable post carbon state. 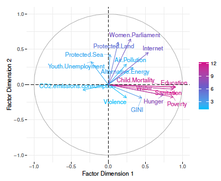 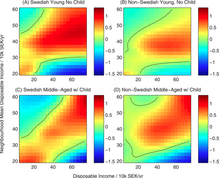 Choice modelling with Gaussian processes in the social sciences: A case study of neighbourhood choice in Stockholm, 2018, Richard P. Mann, Viktoria Spaiser, Lina Hedmann and David J.T. Sumpter, PLoS ONE, 13(11), ​e0206687.
We present a non-parametric extension of the conditional logit model, using Gaussian process priors. The conditional logit model is used in quantitative social science for inferring interaction effects between personal features and choice characteristics from observations of individual multinomial decisions, such as where to live, which car to buy or which school to choose. The classic, parametric model presupposes a latent utility function that is a linear combination of choice characteristics and their interactions with personal features. This imposes strong and unrealistic constraints on the form of individuals’ preferences. Extensions using non-linear basis functions derived from the original features can ameliorate this problem but at the cost of high model complexity and increased reliance on the user in model specification. In this paper we develop a non-parametric conditional logit model based on Gaussian process logit models. We demonstrate its application on housing choice data from over 50,000 moving households from the Stockholm area over a two year period to reveal complex homophilic patterns in income, ethnicity and parental status.

Advancing sustainability: using smartphones to study environmental behavior in a field-experimental setup, 2018, Viktoria Spaiser, Davide Luzzatti and Aliki Gregoriou, Data Science. Methods, Infrastructure, and Applications, online first publication.
​Ecological sustainability is the defining challenge of our time. Here we suggest a methodological approach that could help to investigate how environmental behavior (transport behavior, energy consumption, food consumption, goods consumption, wasting) dilemmas can be overcome on an individual level in real life by using smartphones to collect daily behavioral data in a field-experimental setup. Previous related studies are reviewed and we discuss how the boundaries of what can be done with smartphones for data collection and experimental purposes can be pushed further to allow for complex behavioral studies. Results from a pilot study are presented to discuss the feasibility and potential of this approach. The pilot shows that studying social dilemma behavior via smartphones is feasible and has potential value as a behavioral intervention tool. 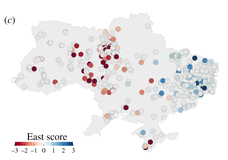 Polarized Ukraine 2014: ​opinion and territorial split demonstrated with the bounded confidence XY model, parametrized by Twitter data, 2018, Maksym Romenskyy, Viktoria Spaiser, Thomas Ihle and Vladimir Lobaskin. Royal Society Open Science, 5,​171935.
Multiple countries have recently experienced extreme political polarization, which, in some cases, led to escalation of hate crime, violence and political instability. Besides the much discussed presidential elections in the USA and France, Britain's Brexit vote and Turkish constitutional referendum showed signs of extreme polarization. Among the countries affected, Ukraine faced some of the gravest consequences. In an attempt to understand the mechanisms of these phenomena, we here combine social media analysis with agent-based modelling of opinion dynamics, targeting Ukraine's crisis of 2014. We use Twitter data to quantify changes in the opinion divide and parametrize an extended bounded confidence XY model, which provides a spatio-temporal description of the polarization dynamics. We demonstrate that the level of emotional intensity is a major driving force for polarization that can lead to a spontaneous onset of collective behaviour at a certain degree of homophily and conformity. We find that the critical level of emotional intensity corresponds to a polarization transition, marked by a sudden increase in the degree of involvement and in the opinion bimodality. 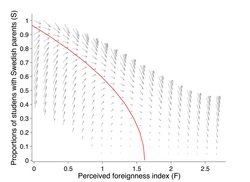 Identifying Complex Dynamics in Social Systems: A New Methodological Approach Applied to Study School Segregation, 2018, Viktoria Spaiser, Peter Hedström, Shyam Ranganathan, Kim Jansson, Monica K. Nordvik and David J.T. Sumpter. Sociological Methods & Research, 47(2), 103-135.
It is widely recognized that segregation processes are often the result of complex nonlinear dynamics. Empirical analyses of complex dynamics are however rare, because there is a lack of appropriate empirical modeling techniques that are capable of capturing complex patterns and nonlinearities. At the same time, we know that many social phenomena display nonlinearities. In this article, we introduce a new modeling tool in order to partly fill this void in the literature. Using data of all secondary schools in Stockholm county during the years 1990 to 2002, we demonstrate how the methodology can be applied to identify complex dynamic patterns like tipping points and multiple phase transitions with respect to segregation. We establish critical thresholds in schools’ ethnic compositions, in general, and in relation to various factors such as school quality and parents’ income, at which the schools are likely to tip and become increasingly segregated.

Communication Power Struggles on Social Media: A Case Study of the 2011-12 Russian ﻿Protests.﻿﻿﻿﻿
2017, Viktoria Spaiser, Thomas Chadefaux, Karsten Donnay, Fabian Russmann and Dirk Helbing.
Journal of Information Technology & Politics 14(2), 132-153.
In 2011-2012 Russia experienced a wave of mass protests surrounding the Duma and presidential elections. The protests, however, faded shortly after the second election. We study the Russian political discourse on Twitter during this period and the main actors involved: the pro-government camp, the opposition and the general public. We analyse around 700.000 Twitter messages and investigate the social networks of the most active Twitter users. Our analysis shows that pro-government users employed a variety of communication strategies to shift the political discourse and marginalise oppositional voices on Twitter. This demonstrates how authorities can disempower regime critics and successfully manipulate public opinion on social media. ​ 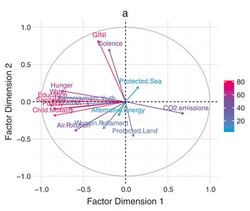 ​The Sustainable Development Oxymoron: Quantifying and Modelling the Incompatibility of Sustainable Development Goals. 2017, Viktoria Spaiser, Shyam Ranganathan, Ranjula Bali Swain and David J.T. Sumpter. International Journal of Sustainable Development & World Ecology, 24(6), 457-470.
In 2015, the UN adopted a new set of Sustainable Development Goals (SDGs) to eradicate poverty, establish socioeconomic inclusion and protect the environment. Critical voices such as the International Council for Science (ICSU), however, have expressed concerns about the potential incompatibility of the SDGs, specifically the incompatibility of socio-economic development and environmental sustainability. In this paper, we test, quantify and model the alleged inconsistency of SDGs. Our analyses show which SDGs are consistent and which are conflicting. We measure the extent of inconsistency and conclude that the SDG agenda will fail as a whole if we continue with business as usual. We further explore the nature of the inconsistencies using dynamical systems models, which reveal that the focus on economic growth and consumption as a means for development underlies the inconsistency. Our models also show that there are factors which can contribute to development (health programmes, government investment in education) on the one hand and ecological sustainability (renewable energy) on the other, without triggering the conflict between incompatible SDGs.

Revising the Human Development Sequence Theory using an Agent-Based Modeling Approach and Data. 2016, Viktoria Spaiser and David J.T. Sumpter. Journal of Artificial Societies and Social Simulation﻿, 19(3), DOI: 10.18564/jasss.3084
Agent-based models and computer simulations are promising tools for studying emergent macro-phenomena. We apply an agent-based approach in combination with data analysis to investigate the human development sequence (HDS) theory developed by Ronald Inglehart and Christian Welzel. Although the HDS theory is supported by correlational evidence, the sequence of economic growth, democracy and emancipation stated by the theory is not entirely consistent with data. We use an agent-based model to make quantitative predictions about several different micro-level mechanisms. Comparison to data allows us to identify important inconsistencies between HDS and the data, and propose revised agent-based models that modify the theory. Our results indicate the importance of elites and economic inequality in explaining the data available on democratisation.

﻿Understanding Democracy and Development Traps Using a Data-Driven Approach﻿, 2015, Shyam Ranganathan, Stamatios C. Nicolis, Viktoria Spaiser, David J.T. Sumpter. Big Data 3(1), 22-33.
Methods from machine learning and data science are becoming increasingly important in the social sciences, providing powerful new ways of identifying statistical relationships in large data sets. However, these relationships do not necessarily offer an understanding of the processes underlying the data. To address this problem, we have developed a method for fitting nonlinear dynamical systems models to data related to social change. Here, we use this method to investigate how countries become trapped at low levels of socioeconomic development. We identify two types of traps. The first is a democracy trap, where countries with low levels of economic growth and/or citizen education fail to develop democracy. The second trap is in terms of cultural values, where countries with low levels of democracy and/or life expectancy fail to develop emancipative values. We show that many key developing countries, including India and Egypt, lie near the border of these development traps, and we investigate the time taken for these nations to transition toward higher democracy and socioeconomic well-being.

The Dynamics of Democra﻿cy, Development and Cultural Values, 2014, Viktoria Spaiser, Shyam Ranganathan, Richard P. Mann, David J.T. Sumpter. PLoS ONE 9(6). e97856.
﻿Over the past decades many countries have experienced rapid changes in their economies, their democratic institutions and the values of their citizens. Comprehensive data measuring these changes across very different countries has recently become openly available. Between country similarities suggest common underlying dynamics in how countries develop in terms of economy, democracy and cultural values. We apply a novel Bayesian dynamical systems approach to identify the model which best captures the complex, mainly non-linear dynamics that underlie these changes. We show that the level of Human Development Index (HDI﻿) in a country drives first democracy and then higher emancipation of citizens. This change occurs once the countries pass a certain threshold in HDI. The data also suggests that there is a limit to the growth of wealth, set by higher emancipation. Having reached a high level of democracy and emancipation, societies tend towards equilibrium that does not support further economic growth. Our findings give strong empirical evidence against a popular political science theory, known as the Human Development Sequence. Contrary to this theory, we find that implementation of human-rights and democratisation precede increases in emancipative values.﻿
As PLoS ONE is very slow with responding to our correction request, please find the corrected Supporting Information document here.

﻿﻿﻿Bayesian Dynamical Systems Modelling in the Social Sciences﻿﻿﻿, 2014, Shyam Ranganathan, Viktoria Spaiser, Richard P. Mann, David J.T. Sumpter. PLoS ONE 9(1). e86468.
﻿Data arising from social systems is often highly complex, involving non-linear relationships between the macro-level variables that characterize these systems. We present a method for analyzing this type of longitudinal or panel data using differential equations. We identify the best non-linear functions that capture interactions between variables, employing Bayes factor to decide how many interaction terms should be included in the model. This method punishes overly complicated models and identifies models with the most explanatory power. We illustrate our approach on the classic example of relating democracy and economic growth, identifying non-linear relationships between these two variables. We show how multiple variables and variable lags can be accounted for and provide a toolbox in R to implement our approach.﻿
Download Full Publication List (PDF)
Google Scholar Citations